This article is about the main character. For the video game, see Tomba!

Tomba (Tombi in Europe) is the titular protagonist of the Tomba! series, a feral child who is in pursuit of the Evil Pigs. Tomba has hot pink hair and large canine teeth. He typically wears his favorite pair of green pants and a golden bracelet, passed down to him by his late grandfather.

Tomba is a brave child who is willing to help out his friends no matter the cost. He lacks the ability to speak, but can easily be understood by the people he meet.

Tomba once lived peacefully in the wilderness and only concerned himself with the protection of his grandfather's gold bracelet, until he witnesses three Koma Pigs assaulting a traveling man. Tomba intervenes by charging at, only to be accidentally knocked unconscious. Tomba awakens to find them and his bracelet gone. Determined to retrieve the stolen heirloom, Tomba runs into the Village of All Beginnings.

After reaching the Dwarf Village, he learns about the Evil Pigs, who has cursed the land with their evil magic and the only way to defeat the leader is to defeat the seven subordinated Evil Pigs.

After the events of the first game, Tomba lives in his mansion in the Village of All Beginnings, when he receives a letter that his friend, Tabby, has disappeared. Tomba jumps into the sea, and ends up on an unknown island. Together with Charles and Zippo, they must capture six Evil Pigs, who have once again cursed the continent with their magical powers.

Tomba with his Blackjack in the introduction cutscene from the first game. 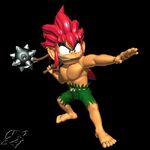 Tomba swinging his Blackjack from the second game. 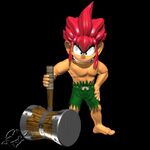 Tomba holding his hammer from the second game.

Add a photo to this gallery
Retrieved from "https://tomba.fandom.com/wiki/Tomba?oldid=12425"
Community content is available under CC-BY-SA unless otherwise noted.