Tomba! (Tombi! in the PAL region, Ore! Tomba in Japan) is a side-scrolling action-adventure video game, developed by Whoopee Camp and published by Sony Computer Entertainment for the PlayStation video game console. It was released in 1997 for Japan, and in 1998 for North America and the PAL region. It was succeeded by Tomba! 2: The Evil Swine Return in 1999. The game has been released on PlayStation Network for Japan, North American and the PAL region by MonkeyPaw Games.

Tomba! is set on a mysterious continent which has been cursed and transformed by the magical Evil Pigs. Tomba, a feral child whose bracelet was stolen by Koma Pigs, travels across various landscapes while completing events and capturing the Evil Pigs in order to lift the curses.

The story tells about a young feral boy, named Tomba (Tombi in the PAL version) who is on a quest to retrieve a golden armlet, which was stolen by some anthropomorphic pigs, called Koma Pigs, in a fight. He makes his way over to the civilization, only to see that the leaders of the Koma Pigs, the Evil Pigs, has cursed the whole continent. Now Tomba must free all the different lands and towns from the curse and defeat the Evil Pigs in order to retrieve the lost armlet.

Tomba! is a two-dimensional platforming game, which contains some RPG elements. The main character, Tomba, can jump on and throw his weapon to attack enemies. By leaping on enemies, he gain experience which allows him up level up some abilities that can be activated as the game progresses, as a flame shield and a double jump. 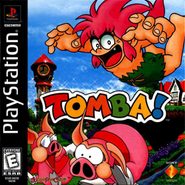 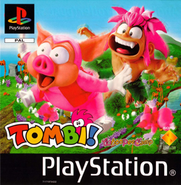 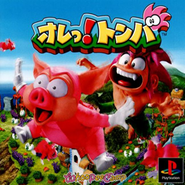 PAL Logo (Animated)
Add a photo to this gallery

Add a photo to this gallery

Retrieved from "https://tomba.fandom.com/wiki/Tomba!?oldid=12438"
Community content is available under CC-BY-SA unless otherwise noted.